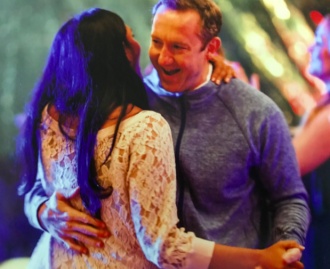 Our Love Story....
John and I are really lucky. We met in the last place on earth I ever thought I’d even find a serious boyfriend- Chiropractic School in Iowa. I am a Jersey girl through and through. I was born in NYC. When I first got to Davenport, a guy asked me on a date to a tractor pull and I started laughing, thinking he was joking. I was the only one laughing.

After that, I just thought I would be single for the next four years in Chiropractic School and meet a guy once I got home. I made a list of everything I wanted in a guy and put it away. Funny thing is, I met John the very next day. I was tutoring a biochemistry class and I thought I would have thirty or forty students in a small classroom. Instead, there were over 100 students and I was in a giant lecture hall with an echo like they have in giant caves.

I decided to take a deep breath and focus on the very nice looking guy who was smiling at me from the way back. I basically talked to him for the entire lecture. That, was John. Even in a crowd of over 100 people, when he didn’t even know me, he made me happy. He made me so happy I didn’t even notice or care that I was lecturing about biochemistry for two straight hours to all students who were at least three years older than me. It didn’t hurt that he’s super good looking and I thank my lucky stars everyday that he is not a movie star and I get to have him all to myself.

I wish I could say our courtship was that simple but it wasn’t. Chiropractic school is hell in the middle of a cornfield. We have been battle tested in every sense of the term even in the very beginning of our relationship. We study for ten hours a day, have science classes with labs at least two additional hours a day, we’re all broke, and we are all exhausted and stressed out of our minds. To boot, I blew John off as soon as I found out he was a rugby player. I still remembering telling him that Rugby boys drink out of boot (it’s called shooting the boot- they take someone’s gross, dirty shoe, fill it with alcohol, and drink from it. GROSS. Just super gross.) and sleep with everyone.

I wish I could say our courtship was that simple but it wasn’t. Chiropractic school is hell in the middle of a cornfield. We have been battle tested in every sense of the term even in the very beginning of our relationship. We study for ten hours a day, have science classes with labs at least two additional hours a day, we’re all broke, and we are all exhausted and stressed out of our minds. To boot, I blew John off as soon as I found out he was a rugby player. I still remembering telling him that Rugby boys drink out of boot (it’s called shooting the boot- they take someone’s gross, dirty shoe, fill it with alcohol, and drink from it. GROSS. Just super gross.) and sleep with everyone.
About a week after I made that declaration, EVERYONE EVERYWHERE I would go, would point John out to me, telling me what a great guy he is. By the way, I didn’t realize that he is older than me at this point because he has a baby face. I remember telling my friends that if I wanted to babysit, I would get paid to do it.

I finally got fed up of everyone talking about him and asked the Japanese, English-as-a- second-language student I was privately teaching why she likes John so much and she said to me ‘when everyone else make fun of me, he sit and explain the English word.’

So, I later found out that John is older than me and the nicest guy ever. Of course, this was after I had already stuck my foot deep, deep down my throat and swallowed it.
He made me work for it after that. I basically had to redeem myself. He was playing Rugby in addition to going to school full time, he was on a half Rugby Scholarship. That means he was always hungry and I cooked up a storm for him. I even cooked for his Rugby buddies and helped them pass their classes. When biochemistry class was finally over, he invited me out to the park for a picnic. I was so happy to be going on a first date with him... until at the end he said ‘thanks for the help with biochemistry and left.’ I am pretty sure it took me ten minutes to pick my jaw up off of the floor.

I cooked for him again after that and that’s when I finally got asked out on an official date. He took me to the park and played guitar for me under an arch of flowers. We didn’t have much back then but at that moment, I had everything I ever wanted.

There is one other secret to tell you about John and I. Only two of my very closest friends, you, and the people helping me with the adoption know this...in addition to being my absolute best friend and someone I look up to, I actually dreamed of John long before I met him. When I was in middle school, I spent a whole night crying my eyes out because my best friend was moving to Taipei, Taiwan. I was heart broken because I love my friends and I get very attached to people. I couldn’t sleep and I couldn’t stop crying nine hours later. When I finally went to sleep, I had a dream that I was in the forest by my house, near a stream I used to play in as a kid. A boy came to me in that dream and told me I would be okay. I knew in the dream he was my friend and I remember asking him to stay. I knew I was dreaming and I didn’t want him to be gone when I woke up. I asked him to stay but he said he had to leave but that he would be back. I woke up feeling refreshed and not as heart broken.

Once John and I had been dating for a few months, he showed me pictures of himself from he was younger. I recognized him as the boy in my dream. I am not sure what you think about destiny or soul mates but I can tell you this- I was meant for John and he was meant for me. There is no one more magical to me in the entire universe.

Our Home
Our home is filled with peace, love, friends, family, flowers, and our little hamster and cockatiels. Often- times, it is a refuge for those needing a good laugh, a little TLC, or a nice home-cooked meal. Our door is always open. We are dedicated to being kind, honest and openhearted, and we can’t wait to expand our hearts and devote our lives to a child. We are childless, and we look forward to the time when we are blessed to become parents together.

Home Sweet Home
We spend hours gardening and love to make things look beautiful. We spend our mornings listening to the birds sing and watching the chipmunks and bunnies. At night, the entire yard lights up and it looks like a storybook garden.

My husband John...
John is like the first day of spring. He brings warmth, happiness, and life to end the bitter cold. Just being around him imparts a sense of peace, protection, and acceptance. He is kind, patient, and can make anyone double-over from laughter.

I am convinced that he is part magic. I have seen wild dolphins and schools of fish flock to him. Once, when we were in the Ocean, he had an entire school of fish follow him everywhere he went. I think they thought he was the head fish. We’ve even had wild dolphins come up to him. He’s the only dude I know that gets free things and hugs from other dudes. He genuinely cares and is interested in all people. One time, we got a free taxi ride in NYC, just because the cab driver enjoyed talking to him so much. He is my best friend, and I love him more every single day.

John is magic with babies. Moms bring their babies in all of the time for colic or constipation and John has these babies laughing and cooing in no time at all. He’s magic with animals as well. I have never met a baby or an animal that did not love him.
My wife Veera...
Veera is my best friend. Everyday she teaches me what love and kindness really mean. Whenever she walks into a room, you can see people truly light up at her presence. She loves to teach, write and learn (which she calls “sponging”). She is hilarious, spontaneous and never stops moving.

Life is meant to be experienced, and there is no other person I would want to do that with. She loves the outdoors and traveling. She takes great pride in her garden and watching things grow. This probably explains why I love her more everyday. If I have had only one goal in life, it would be to make her as happy as she makes me.

Veera is wonderful with children. They are drawn to her and she is drawn to them. I feel completely confident that my wife Veera will make the most wonderful mother. 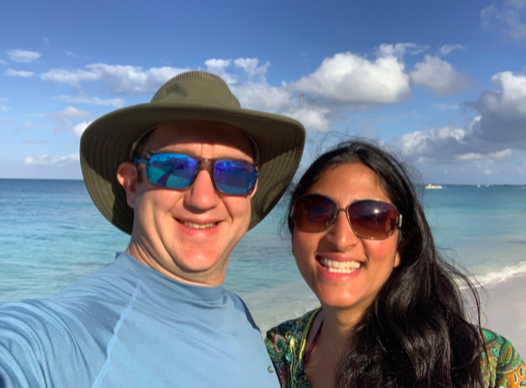