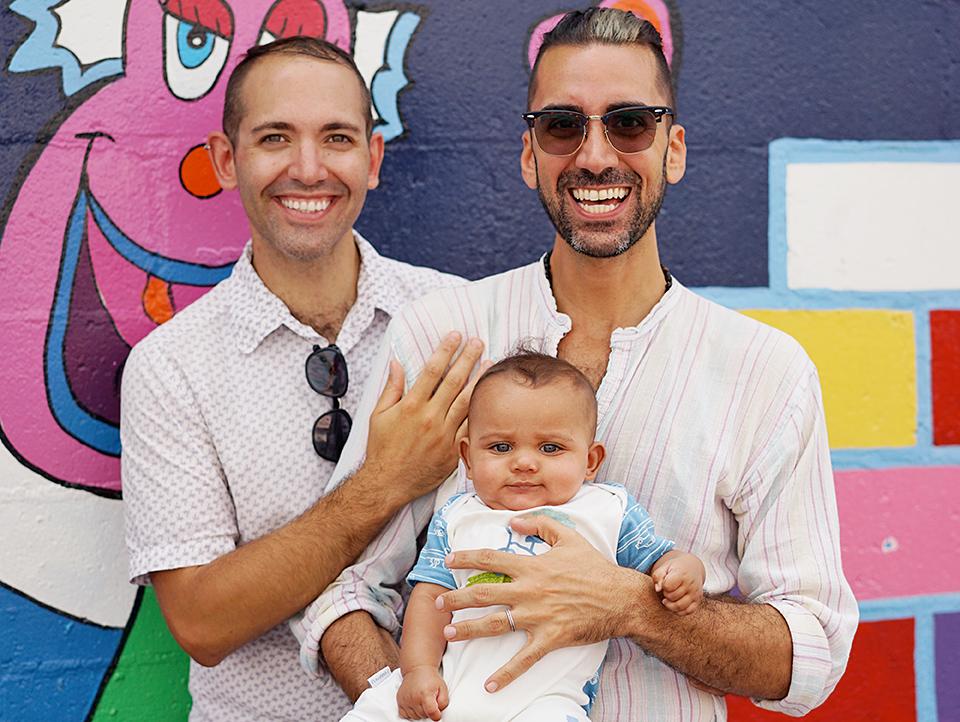 Since we’re two guys, there was always a thought that adoption was our only option. We heard these things could take years, so we decided to get things rolling just three months after our wedding. Once it was real (We were really doing this!) we learned that there were so many options and paths to parenthood. It was kind of mind boggling.

Surrogacy: Neither of us had an urge to have a biological child. Even if we wanted this, financially it was not an option.

Adoption through foster care: This is something we really considered. We had a meeting with New York Foundling (a child welfare and foster care service agency in New York) and learned more about it. In addition to it being a very drawn out process, there was little chance of having an infant placed with us. We learned that the concept and goal of the foster care system is family reunification. We wanted to build our family. We couldn’t ethically be part of such an amazing cause if our end goal was in direct contradiction to the mission of the organization.

Feelings of foolishness followed—how much money did we spend on our wedding?! We left and then the feeling of hopelessness set in.

So we were brought back to straight-up adoption. We did some research and went to a few information sessions with adoption agencies. The first one we went to asked for the adoption fees up front, $30,000! We sat in the conference room with all these other couples. There was an air of hope mixed with desperation. Feelings of foolishness followed—how much money did we spend on our wedding?! We left and then the feeling of hopelessness set in.

We did some more searching on the internet and found an agency that had the magic words: SLIDING SCALE!! So, in December 2013, we went to an information session and really fell in love with a non-profit agency. They focused on open adoptions and support, for the client as well as the birth mother. This seemed right.

We decided to wait a few months to save some money before we went to the orientation workshop; however, we did so in May 2014. Now we had some homework to do! We gave ourselves deadlines and flew through all of the paperwork: background checks, writing our Dear Birthmother letter, creating a Facebook page, getting our 800 number, completing our home study, etc. For our marketing efforts, we kept things consistent across all platforms (using the same profile picture, not writing posts in first person point of view) and created a brand that was RicciAdopt.

In September 2014, we were live! Ready to go! Bring on the birthmothers! Why isn’t anyone calling?

We realized that this was okay, and all part of the process. Our agency (IAC) offers monthly counseling groups, and we definitely wanted to take advantage of all the support offered. The sessions had topics, but waiting families also talked about their struggles, experiences with birthmothers, failed matches, and strategies. During one session, someone mentioned Adoptimist. We didn’t know what that was, but the couple said once they went Premium, they started receiving contacts. We wanted in on this!

Getting scam emails gave us a sort of optimism; it meant that someone, somewhere saw our post.

We created a profile and decided that we would wait to go Premium in January. That way we could get through the holidays, take our planned vacation to Puerto Rico, and then in the new year we’d open those floodgates we had been waiting for.

January 2, 2015: new year, new hope, new strategy! We signed up for Adoptimist Premium and were ready for action! This was it. Between our Adoptimist profile, our Facebook page (which now had over 2,000 likes), and photo postcards that we sent to every Planned Parenthood in New York, our brand was completely and totally “out there.” Then came the scams. Nothing horrible like the horror stories you hear about when people financially support someone who isn’t even pregnant. Just a few sketchy emails with text like, “You still needs baby?” Getting scam emails gave us a sort of optimism; it meant that someone, somewhere saw our post. On January 16, 2015, exactly two weeks after signing up for Adoptimist Premium, we received a call. It was from a woman in Oregon whose friend was pregnant, due in May, and considering adoption. After we were talking to this woman for about fifteen minutes, she revealed that her friend was in the room, and the conversation continued with the actual expectant mother. She seemed genuine and real. After hearing so many horror stories about adoption scams and failed matches, we expected to be a bit more skeptical, but we weren’t. This was good.

At the end of the month we cancelled our Premium subscription. It was the best $150.00 ever spent!

We followed up with our agency, an intake was completed, and we were officially “matched” on January 23rd. At the end of the month we cancelled our Premium subscription. It was the best $150.00 ever spent!

The match period was just shy of four months—the longest four months in the history of time. During that time, we flew out to Oregon to meet the expectant mother in person. We met her and several of her friends. It was a great trip, and we made a really good connection. We even did a pregnancy photo shoot—her idea! IAC assigned us a counselor who helped us through the process, and they offered counseling support to the expectant mother. This is when we really saw the value of having an agency in our corner.

On May 19, 2015, Rocco Hudson Ricci was born! All went well, and baby and birthmother were discharged the next day. Thanks to our amazing attorneys and our fantastic IAC counselor, ICPC took three days, and we (Rocco and his dads) got on a red-eye when he was only nine days old.

We know we’re so fortunate to have had this happen so quickly. “Live” in September with IAC, baby by May…it doesn’t happen that fast. We look back and wonder what worked. Honestly, nothing works on its own, but rather as a piece of a larger marketing/outreach/PR strategy. Adoptimist helped Rocco’s birthmother find us initially, but with the support through our agency, the birthmother’s friends admittedly “stalking” our Facebook page, and our amazing attorneys, everything worked in conjunction to make this all happen.

Adoption is amazing…our daughter was a birth mother…such an amazing woman well educated..but understood she was not ready as a woman to be a full time mom!  Our blessings to all birth moms and adoptive parents together we make children’s lives strong and families amazing!


Hi guys! Thank you for sharing your adoption story. We feel a renewed sense of hope since joining Adoptimist last month. We have been waiting for our baby for over 3 years. We were with a contract agency and never received one interest phone call. We too have explored foster care (maybe still exploring) but have received mixed information from different companies and mixed emotions if this would be the path for us. Deep down inside, we really want an infant too. We are so excited to now be a part of the Adoptimist Community. Thanks again for sharing your story and congratulations!
Tammy & CJ