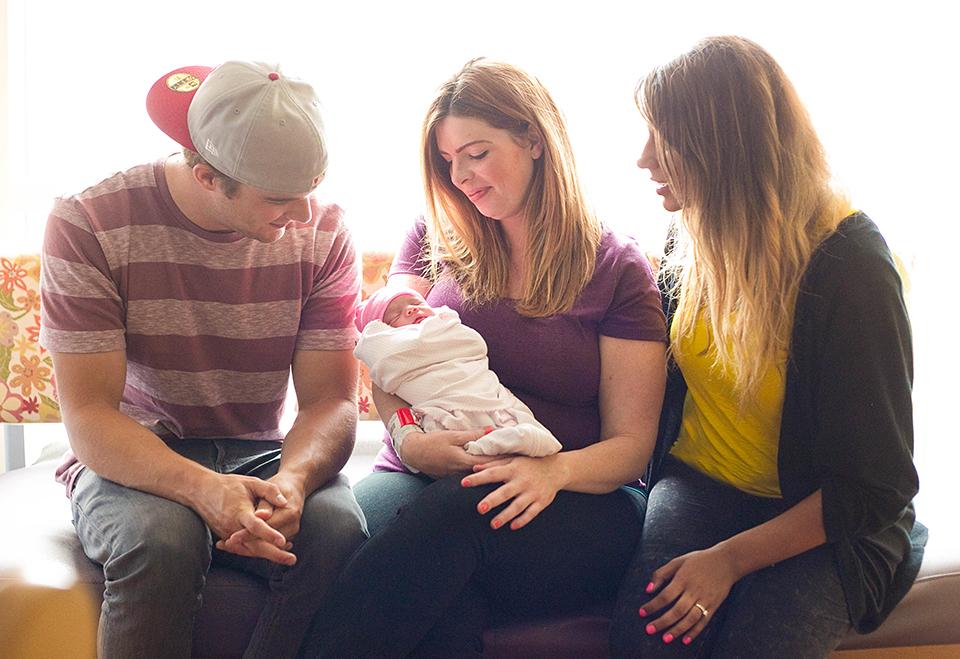 Matt and I were married in 2008, and shortly after, decided we wanted to start a family. A few years went by with no positive pregnancy tests and then an infertility diagnosis. We were told that, other than by a miracle, the only way we could conceive would be through IVF. I was at peace with our diagnosis because adoption has never felt like a last resort for us. Adoption has been a goal I’ve had since I was a little girl. I shared the urge to adopt with Matt since our very first date, and he was all on board. I felt like God had prepared us for many years for this pivotal moment.

Our strategy for setting up our Adoptimist profile was to keep it simple. Selecting a couple for an unborn child has to be overwhelming so we posted quite a few photos to our profile & made sure we posted new ones weekly.

We completed our home study and started researching adoption agencies to help us find our birthmom. We very quickly realized our budget was a little too small to go through an agency, so I began researching how to do a private adoption. I came across some other sites to help our profile get some great exposure. However, I didn’t love how we were forced into a contract if we wanted our profile to be displayed. And if we were matched before our contract ended, we would still have to pay for the months we didn’t need. Then, I discovered Adoptimist. I immediately was drawn to the pleasant look of the website. We loved how there was a live “feed” of adopting couples right on the homepage. Matt and I decided to go with Adoptimist because of the simplicity of creating a profile and the ease of posting it. We read informative profile statistics, and we weren’t locked into a contract!

Our strategy for setting up our Adoptimist profile was to keep it simple. We decided we wanted pictures to really help tell our story, so we posted quite a few photos to our profile and made sure we posted new ones weekly. I believe that displaying just a short summary about us on the front page of our profile helped draw birthmothers into our profile. Selecting a couple for an unborn child has to be so overwhelming, and I didn’t want potential birthmoms to feel overwhelmed by lots of text when they first clicked on our profile. In the headline of our profile, we made sure to put exactly what type of baby we wanted to adopt. Our headline stated, “We are a loving couple desiring to adopt an African American or biracial baby.” I really felt like stating this from the get go was a great idea because whenever we received an e-mail from a birthmom, she was almost always having the type of baby we were desiring to adopt, and no time and excitement were wasted!

About a week later, we got a call from our social worker. He said that the birthmom and her boyfriend had a change of plans and wouldn’t be continuing with the adoption.

Initially, I found myself reading a bunch of other parent profiles to figure out what we wanted to express in ours. This quickly became very overwhelming, so we trusted our instincts and wrote from our hearts. Our daughter’s birthmom later told us that she admired our honesty and candidness in our introduction letter. I updated our profile twice a day so that we could be seen on the homepage of the Adoptimist site. I asked all of the birthmoms who contacted us why they decided to reach out to us. The most common answers we received were they liked that we are a mixed race couple and that we live an active lifestyle. Birthmothers also liked our pictures and called us a “beautiful couple.” I cringe writing that last part because I hate to sound like I am bragging! I truly believe any couple is beautiful, especially when they have a professional photographer take their adoption profile picture. That is so important!

Once our profile was live, in January 2014, we were so excited! We had hundreds of hits to our profile in just a month’s time. On average, we had two to three birthmoms contact us through our Adoptimist e-mail per month. We were matched with our first serious birthmom a month after our profile went live. She was super sweet and lived in Montana. We lived in Idaho at the time, which was only four hours away from her. She e-mailed me initially through Adoptimist, and we would text or talk on the phone daily for almost a month. After that month had passed, she invited us to come up to Montana for her six-month ultrasound appointment. We were SO EXCITED! We made the drive up and met up with birthmom, her boyfriend, and her son in a mall parking lot before heading up to the hospital. Surprisingly, we didn’t feel too nervous because we felt like we were just meeting up with friends! The ultrasound appointment went great, and we all went to lunch afterwards. We went back home to Idaho that night and everything felt perfect! We started buying baby clothes and getting prepared for baby’s arrival. About a week later, we got a call from our social worker. He said that the birthmom and her boyfriend had a change of plans and wouldn’t be continuing with the adoption. We were crushed. I took a couple of days off work to let my mind process everything. We went on some fun dates with close friends, and that really helped us to recharge, and most importantly, just laugh. It took us a good two weeks to process and accept that our adoption had failed and it was time to move on. That was a really hard time, but we were even more motivated after that to find our baby!

Once the time comes to discuss openness with your birthmom, keep those expectations you’ve previously set in mind so you’re not agreeing to openness that you’re not comfortable with.

In April, we were contacted by another (very special) birthmom. Our initial emails with Jessica, our daughter’s birthmom, just felt RIGHT. They were simple and lighthearted. In the first few emails, we were just trying to schedule a time to chat on the phone. When we talked on the phone for the first time, I had prepared a list of questions that I wanted to weave through the conversation in a natural way as we were conversing. These were some of my questions: Why have you chosen the path of adoption? Tell me about your family, and do they support your adoption plan? How far along are you, and do you know baby’s gender and due date? Tell me about the level of openness you’re desiring.

In this first conversation, we talked about openness. She requested that we send a couple of pictures a week and send a text to let her know how the baby was doing. Since we had been texting daily at this point, that was not a problem. We also talked about having a visit once a year. I understand this level of openness might not be appropriate for all couples, but it has worked for us. A VERY important piece of advice I would like to give adoptive couples is that when a birthmom contacts you, it is SO exciting that—trust me—you will be very quick to agree to whatever level of openness she’s requesting. It’s important to talk about your realistic openness expectations with your partner and set them. Then once the time comes to discuss openness with your birthmom, keep those expectations you’ve previously set in mind so you’re not agreeing to openness that you’re not comfortable with. We did not write up an openness agreement, but if that’s something you’re thinking you need to create, do it! Trust your heart!

Our first phone conversation felt extremely natural. We exchanged Instagram information at the end of the conversation, so we were able to look at pictures of her and her girls. She also sent me an ultrasound picture, which was so COOL! We talked several times a week through texts, and I asked if she would be okay with me flying out to meet her and her family and go to an ultrasound appointment. We set up travel plans, and I was a on a flight out to Iowa a few weeks before Jessica’s due date. Unfortunately, Matt wasn’t able to take off work. During my time in Iowa, I stayed in a hotel close to Jessica’s house. We went out to dinner a few times, went baby shopping, and best of all, we went to a 4D ultrasound! Some advice I would give couples who are going to meet their birthmom for the first time is to buy her some flowers. This is a great way to break the ice and show how appreciative you are! Also, I made sure to ask her one particular question: if she could go to any restaurant in town, what would it be? I took her there! And since Jessica has three daughters, I made sure to get to know them and expressed to them how grateful I am for their strength and for trusting us with this precious gift.

A few lows we had through our adoption process were our failed adoption and a few scammers. Trust your gut. If it doesn’t feel right, move on.

Several phone calls, texts, and fun conversations later, Jessica gave birth to a miracle girl, Jada, in July of that year. We flew out the day after Jada was born, and she has been with us ever since! We send Jessica weekly pictures and text updates! Our birthmom is close family to us. We absolutely love her, and she is so genuine and kindhearted.

A few lows we had through our adoption process were our failed adoption and a few scammers. We had heard about adoption scammers, so we felt prepared for them. We had one person try to scam us, but it was VERY obvious she was only out for money. These are a few tips for figuring out if a birthmom is legitimate: 1. Look up her name through Google, Facebook, Twitter, and Instagram. 2. Call an attorney in the birthmom’s residing city and ask that person to run a soft background check. 3. Ask the birthmom to Skype or FaceTime. 4. Trust your gut. If it doesn’t feel right, move on.

We would give adopting couples a few tidbits of advice:

- Create a premium Adoptimist profile, even if it’s just for a couple of months. The exposure Matt and I received through our profile was due in huge part to paying a little more to have that membership.

- In your photo, wear an outfit that will stand out—in a good way! Our birthmom was initially attracted to the bright colors in our profile picture.

- Consider not using an agency. We saved a significant amount of money by hiring adoption attorneys in our home state and Iowa where our daughter was born, instead of going through an agency. Basically, Adoptimist acted as our “agency” in helping us get connected with Jessica, which was so awesome!

Without this site, we would not have been connected with our amazing birthmom! Matt and I are so thankful for Adoptimist!


I was a passenger of a car accident as a teenager, that stole my right of giving my husband biological children. This site just seems the way of expanding our dreams!
Dustin and Christy Riddell