Children have never come into our family easily. We were the 22 and 24-year-olds sitting in the infertility clinic, listening to a specialist explain that we had one-in-a-million odds of conceiving naturally. I was the 23-year-old going through chemical menopause, trying to control my endometriosis after two surgeries. Despite the odds, we had two miracle pregnancies. Spud wasn't expected to make it beyond the first trimester and I went into labor with Sprout at 24 weeks. She was delivered at full term after 3 months of bed rest and constant prayers. After Sprout, we decided that my body wouldn't be able to carry another pregnancy to term. And with other medical issues, I had a hysterectomy. We had two beautiful children and we were grateful for them.

It took a year of discussion, prayer, financial planning, and a bigger car before we admitted to our families that we wanted another child. Adoption was our only choice.

Several years later though, we started to feel a familiar tug on our hearts. It took a year of discussion, prayer, financial planning, and a bigger car before we admitted to our families that we wanted another child. Adoption was our only choice. My three sisters were adopted so we knew what a blessing it could be. We started researching our options and decided that we wanted to pursue independent adoption. We found a fabulous law firm that only handled adoptions. They were able to answer all of our questions and even suggested some options that would make our adoption more affordable.

After our home study was completed, I set up a website, Facebook page, had an adoption video made (and posted to Vimeo and Youtube), had business cards printed with our photo and contact information on them, and signed up with a website for hopeful adoptive parents. The top tier program was expensive, at $500 a month. But we wanted to try it, assuming it would be viewed by more expectant parents. We advertised with them for three months but only received contact from scammers. The first was the worst. She claimed to be in the military and expecting a little girl. I searched for her everywhere, looking for any evidence that she might be a scammer. After two weeks, I found it. She had five Facebook profiles, all with the same pictures and different names. We were devastated. She was followed by eight more scammers, all with different stories, but all wanting the same thing: money.

We decided that our expensive profile was attracting to much of the wrong kind of viewership and moved to Adoptimist. We encountered a few more scammers, but far less than we had been handling. After a couple of months, Adoptimist started offering a new program called Promote. We thought it looked interesting and tried the Facebook option. Adoptimist picked a few paragraphs from our profile and a few fun photos and managed who saw our ad. After two weeks, we received a message from a young women named Mary.

She asked us if we believed in God, if we would love her little girl even if she drew on our walls. And she asked, if we were to adopt Sweet Pea, would we please not leave her alone in the hospital.

Mary told us about her little girl, Sweet Pea, who had been born prematurely and was still in the hospital. She told us how much she loved her little girl but how she was in an impossible situation. She asked us if we believed in God, if we would love her little girl even if she drew on our walls. And she asked, if we were to adopt Sweet Pea, would we please not leave her alone in the hospital. The more I talked with Mary, the more I liked her. She was upfront about the challenges her daughter would face. Mary was honest that the doctors didn’t know how Sweet Pea’s life would turn out and that she wanted us to take our time and discuss the ramifications, because she wanted Sweet Pea to have a forever family. Someone who would love her, no matter the future. 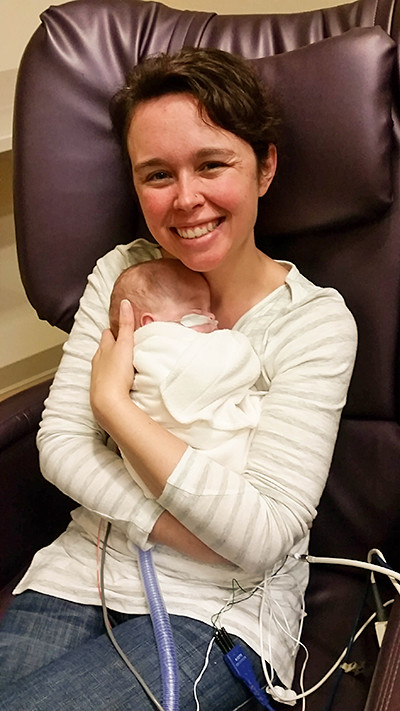 My husband and I did think about it. We had not started this journey seeking a child with special needs. We were open to correctable conditions, but long-term challenges were not part of our plan. We did our research, talked with medical professionals, and education professionals. One evening we sat down, looked at each other, and knew in that instant, that this was our child. She was ours to love, parent, and protect, no matter the future.

She was beautiful. We held her and asked her if we could be her parents.

It took three weeks of texts, phone calls, and two lawyers to get the paperwork together. Sweet Pea’s birth parents signed their parental termination forms on a Tuesday and then we waited. The state in which they live allows for a five or ten-day waiting period. The choose the five-day option. On the fifth day, their parental rights terminated at 4:30 in the afternoon. At 6:00pm, we were in Sweet Pea’s home state, walking into the hospital to meet her.

She was beautiful. We held her and asked her if we could be her parents. Sweet Pea looked at us for a few minutes before snuggling in and falling asleep. Because of her home state’s unique adoption laws, we were able to finalize her adoption in 48 hours.

After months of hoping, planning, heartache, and uncertainty, there weren't any fireworks. No champagne. No parties. After the judge banged his gavel, we got into our car, drove to the hospital, and held our new daughter.

It was a strange day. We had always envisioned our day before a judge with our baby in our arms and our families at the court house to congratulate us. The day we adopted Sweet Pea, the judge showed up late because his car broke down, our baby was on oxygen in the hospital, and our families were nine hours away. After months of hoping, planning, heartache, and uncertainty, there weren't any fireworks. No champagne. No parties. After the judge banged his gavel, we got into our car, drove to the hospital, and held our new daughter. Then we painfully said goodbye and drove home. 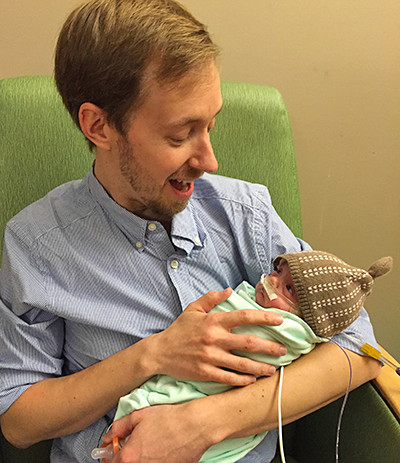 However, we had a promise to keep. We promised Mary and our new daughter that she wouldn't be left and forgotten in a hospital. The second we were in the car we started making phone calls. God moved and provided the miracle of a charity air ambulance service that just happened to be based an hour from our home. Sweet Pea’s hospital coordinated with a Level IV NICU an hour from our home to ensure her continued care and so we could be close to her. The air ambulance service provided the medical equipment and three medical personnel to fly with her to our home state, making sure she was safe and comfortable. We were at her new NICU waiting for her when she arrived.

We visit Sweet Pea everyday, singing to her, talking to her and cuddling her. Our families have also visited her and are planning a baby shower to celebrate her arrival. Sweet Pea continues to grow and we look forward to the day we can bring her home. Her stocking has been added to our fireplace mantle and we are learning how to be NICU parents.

Our journey with Sweet Pea is far from over, but we are taking it one step at a time. We have learned that adoption isn't the end goal. The end goal is a life with a child, another person, who will take your journey with you.