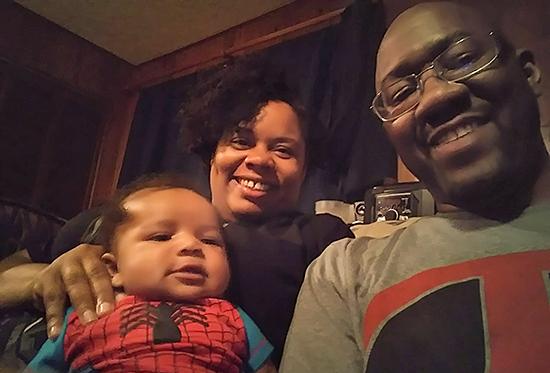 Let me paint you a picture…We were with an adoption agency. We had paid $10,000 already, and in a few weeks, the other $10,000 was due. It was clear we weren’t going to raise the full amount by the deadline, so I called to get an extension. We were denied. The adoption agency had not done anything to find us a child since the funds weren’t paid in full, so we asked for a full refund. The answer was no because we had a contract: “You’re not entitled to a refund of ANY KIND!” We were very disappointed, and our $10,000 was down the drain. But I knew my kid was waiting for us. More distress followed, but eventually through Adoptimist, we found our child.

After the disillusionment with the agency, I had a freshly approved home study, and I was determined that I was going to find our child! We Googled and called every adoption agency we could, until I ran across Adoptimist on Instagram. It was fate. We sent in my information and worked day and night on our profile trying to make it perfect. When our first match came, it was two months after being on the site. I was writing in the journal three times a day to make sure our profile was seen. My entries began with the headings “Dear Birth Mother” and “Dear Future Child,” so I was “talking” directly to them in a one-sided conversation, inviting them to contact me when they were ready. One day, I had a particularly bad day, so I wrote about it. The mother contacted me.

She gave birth to a perfect little girl. She chose to parent her child. It was crushing—lying-in-bed-for-a-week crushing.

She said she had been tuning in to see what we had for dinner, how our day was, what our weekend plans were, and so on. That day I had my meltdown about a frozen chicken, of all things. She liked that—the moment made us real to her. We closed our profile once she said she had picked us. It didn’t seem fair to keep it open. We kept in contact and spoke for hours every day, getting to know each other. To make a long story short, she gave birth to a perfect little girl. She chose to parent her child. It was crushing—lying-in-bed-for-a-week crushing. We took some time to heal. Two months later, we signed back on and our child was waiting. We had a few connections, but some were emotional scammers. They didn’t want money; they were just cat-fishing for a friend. (That’s why I loved the forums. If something sounded fishy, we would do a post and see what came back.) Then our mom found us.

The best happened: a full tank of gas, a five-hour round trip drive, lunch with our future child and his mom, and witnessing his first pictures.

Our last three “connections” were from her town, so I was skeptical, to say the least. We talked every other day. It was going as well as could be expected. She invited me to the ultrasound. I thought, “What’s the worst that can happen?” A full tank of gas, a five-hour round trip drive, and lunch with the mom. That would be the worst. But the best happened: a full tank of gas, a five hour round trip drive, lunch with our future child and his mom, and witnessing his first pictures. It was magical! After a few weeks, we logged off of Adoptimist because we were going to be optimistic about our match once again. We kept in contact, attended all big doctor’s appointments, and kept all the ultrasound pictures.

Agencies are nice. But for us, being involved and hands on in our journey is awesome.

Mom had a C-section after 26 long hours of labor, and we were there when our son took his first breath. We took care of him in the hospital. We would go down the hall to visit his birth mom, and she would come visit us when she wanted to see him. After discharge and surrender papers were signed, we took mom home, then drove the 2 1/2 hours to our home. We have our son. We plan to start the journey again in six months and one day. Agencies are nice. But for us, being involved and hands on in our journey is awesome. Plus, there is nothing like saving $20,000 for college!

Hello.  This story was very inspiring and hopeful.  My wife and I are in the DC area.  Any tips?