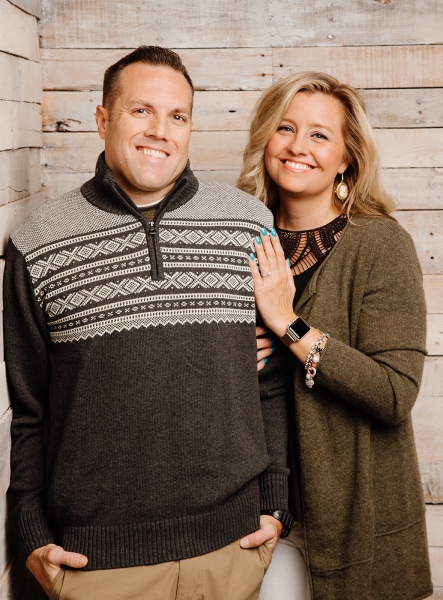 We were married in 2013 and have always wanted children to bless our family. Unfortunately, we haven't been able to have children of our own. We would love to create a family with children through adoption.

About us in a nutshell:

Rob received is MS degree in Nursing and is a nurse practitioner. Janelle received a Master's degree in Public Administration and works part-time as a program manager at a University. We enjoy our work, but for us, work is a means to enjoy our home life and to do things that we wouldn't be able to do without it.

We both love to travel and hope to instill this love of travel in our children! We especially love going to beach destinations! At the beach, we enjoy playing games, reading, picnicking, and snorkeling. We also really enjoy going to destinations where we can camp, hike, and see wildlife.

We definitely plan on traveling with our children! We want them to experience the world and to see different places and cultures. We want them to see how other people in this beautiful world live and for them to love and appreciate others.

Faith and family are central aspects of our lives. We both believe in Jesus Christ and strive to follow his example of love, service, compassion, and hope for the future. Our parents were examples of this faith in Christ and we hope to be similar examples to our children.

Both of our families live nearby. Between us, we have 6 siblings and 26 nieces and nephews! We love spending time together whether at someone's home or going hiking, camping, traveling, to the movies, to sporting events, or any other activity that peaks our interest!

We recently built a home in Utah. Nearby are cows, horses, parks, playgrounds, the library, a recreation center, and many outdoor activities! We look forward to decorating rooms for children and filing them with toys as well as filling our home with love and positive memories for our children to always remember.

Other aspects of our life that we look forward to sharing with our children include: our love of reading and learning, movie nights, eating good food, our love of animals (especially dogs), laughter, and just enjoying each other's company on ordinary days.

We look forward to meeting the expectant mother and/or father that is looking for us.

Rob is from Provo, Utah and I'm from Indio, California. We live in Utah. We met in 2007, when we attended the same congregation of The Church of Jesus Christ of Latter-Day Saints. We were just acquaintances.

In 2012, we both went on a Caribbean cruise with mutual single friends. We became fast friends and felt comfortable around each other. Memories from that cruise include shopping for an antique looking map together, playing with pet monkeys, standing on an outlet of land between the Atlantic and Pacific Oceans, snorkeling, and eating lots of yummy food.

After the cruise, Rob immediately called me for a date. I was surprised, but glad that he did because I missed his company. On our first date, Rob cooked dinner, we went to see Marvel's Avengers, and talked for a long time.

That summer we spent a lot of time together just talking and enjoying one another's company hiking Bridal Veil Falls, star gazing in the West Desert, swimming at Seven Peaks Waterpark, boating at Nebo Lake, and house boating with Rob's family at Lake Powell.

Before we started dating, Rob had decided to move to Hawaii for graduate school at the end of the summer. We knew that they wanted to be together and were talking about getting married, but Rob had already postponed graduate school once and couldn't postpone it again.

When Rob returned for Christmas break, we were married in the Salt Lake City Latter-day Saint Temple. It was funny because Rob didn't tell his friends at school that he was getting married over the Christmas break. After the break, they wanted to know who I was and when he told them that I was his wife, they were all surprised!

We spent the next several years living in Hawaii on an extended honeymoon. While Rob went to school, I worked as a substitute teacher, a elementary school aid, and at the Girl Scouts of Hawai'i. In 2015, we moved back to Utah because Rob had finished school and we wanted to be closer to family. We loved our time in Hawaii and try to make it back every few years.

Over the years, we have had many highs and lows. Our biggest high has been purchasing our own home and traveling together. However, our biggest low has been failed pregnancies and failed IVF procedures. We both have siblings that we love so we have always imagined a family with several children. We hope to grow our family of 2 to a family of more through adoption!