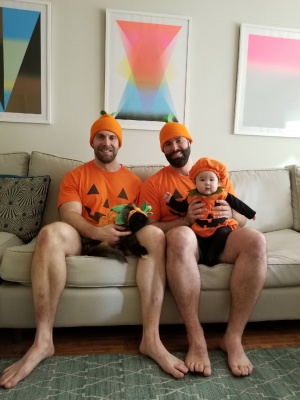 Tom and Justin met in 2006. Tom was unlike any person I had dated up until that point. There were no games; when he said yes he meant it and the same went for no. From
the start, we just worked well together. He was able to be rational and calm at times I had no idea rationality and calmness were possible. When I introduced him to my mom and dad at what was supposed to be a quiet Sunday dinner, unbeknownst to me, my mom had invited the entire family over to meet him. Tom met over 30 relatives in one day. It was a lot, but he fit in extremely well. To this day I’m sure my entire family thinks he’s too good for me. My grandma always gives advice like
“make sure to tell Tom you love him. I’m just not sure what you’d do without him” – grandma translation: you can’t do any better so don’t muck it up. My aunts all go to him for advice on the latest trends/fashions etc. My mom always makes sure to ask his thoughts on her latest endeavors and my father secretly texts him to give him advice on how to “deal with me”….apparently I’m more like my mother than I realize.

Tom and I have the same values and just enough differences to keep it interesting and balance each other out. When work offered me a transfer to California after Tom and I had been dating a few years, he stated that he was “open to moving” but had just bought a house and built a life for himself in Ohio. It was decided I’d move out to Los Angeles first and he’d follow after he sold the house and lined up a job. It took six months for that to happen. There were some big struggles the first two years of relocating but we made it through them fairly unscathed. During one intense argument, Tom looked at me and said “I’m in this. You’re my one person. If you don’t feel the same tell me now because I’m not going to spend time with someone that doesn’t know what he wants.” It was at that moment I realized I really shouldn’t mess this up and maybe he was too good for me. Looking back on all the experiences we’ve had together and the hardships we’ve gone through, I’m proud. I’m proud Tom and I have been happily together for over 13 years without a break or break up. I’m proud of the man I call my partner and I’m proud of the life we continue to build together. The move to Los Angeles was always to be a 2 year temporary deal. Year by year we liked living here more and more; the thought of leaving became harder and harder to fathom. Though we were far away from family; we loved our careers and the life we had slowly created in this giant paradise. As a result of living here being “temporary”, we put off buying a house, getting married and having children. Things we had always said we wanted but year-after-year never acted on because we would do them once we got back to Ohio. A couple years ago. Tom and I were talking and we decided to put down roots in LA. We accepted that we were here for the foreseeable future and we both admitted we were happy here and didn’t want to leave. For so long we kept saying what we thought the other one wanted to hear “we can move back to Ohio whenever you want” ; the problem was neither actually wanted to move back. With the decision to stay out in the open, we bought a home and then started talking about how we wanted to adopt. We had always felt part of the evolutionary purpose (or God’s plan) for gays was to give existing children homes. Neither of us had been married or had kids before. We were ready. Being an overly cautious and a “plan it all out” couple; we managed to wait another year or so before finally agreeing to pull the trigger and start the adoption process. Our friends here, Matt and JJ, were a huge inspiration in showing us that adopting is hard but rewarding. My grandma kept saying “if you wait til you’re ready, you’ll never do it. Trust me boys, you’re ready.” We are creatures of habit and stability. It’s where we thrive; so being able to admit a child will completely change a lot of our day-today and changing our habits took time to accept and be ok with. While Tom and I were deciding if to adopt and when, my sister and her boyfriend decided to beat us and go and have a perfect baby girl. Being around my sister, who I hold in very high regard, and watching the amazing mom she’s become, it made me realize that I wanted to be a parent even more. The main reason I want to adopt is because it’s worthwhile; I want to give a child (or children) love and support and opportunities. I want to raise children with Tom because he’s the best man I know. We’d instill values and morals and convictions in our children and in turn leave the world in a little better shape than we found it. I’m also excited about the experiences; all the firsts and new experiences we will have together with our new family unit.

Parenthood
Our daughter Charlotte was born on April 3, 2018. I didn’t know what to expect as I felt a wealth of emotions rising up as we waited all night in the hospital for her arrival. The planner in me was terrified; we received word roughly 7 days prior, asking if we wanted to be presented to the birth mother. This was clearly not enough time to hash out every minute detail on the intricacies of what it would take to raise a child. The optimist in me was ecstatic; the fact it was happening so quickly was clearly a sign it was meant to be. My mind went back and forth for 15 hours while we waited on her arrival; at roughly 7:40 A.M. we heard her first cry from just down the hall, and we both immediately started to tear up. Logic had left me, and I suddenly realized I was a father. The next day / week / month was a blur. My mother and sister flew out on Charlie’s third day on this planet to help us get settled into our new role as fathers. With care and haste they divided and conquered: one showed us the bottles, cream, diaper genie, formula…..do not deviate!– to buy and use. The other showed us the schedule to get baby girl on, “eat, burp, nap, diaper change – repeat. After just 72 short hours they left and flew back to Ohio. We were a family unit…and we were terrified. To say Charlie was the easiest baby on the planet to care for is an understatement – after a couple short months she started sleeping 6-8 hour stretches overnight, she only really cried when hungry/wet and she loved to be held and talked to.

Fatherhood has both changed and not changed us. Our now 13 year relationship is stronger than ever. We don’t have the luxury to stay mad and bicker about little things we had for the past decade. A baby means you resolve things quickly and thoroughly. Parenting disagreements were something I wasn’t prepared for, but we’ve made it through them (knock on wood). When you know each other as well as we do, it’s fascinating to see a new part of Tom I’ve never seen: father Tom. As with other parts of our relationship, he’s the father ying to my daddy yang. There are times I can’t believe he’s letting Charlie play with his phone – we agreed limited screen time! And then there are other times, I know he’s less than thrilled with Charlie and my rough-housing and wrestling (she’s an absolute daredevil /adrenaline junky at age 11 months). Little differences aside, we are on the same page when it comes to our main goal of parenting: raising a healthy, happy, empathetic human who does good in the world. Being fathers has added even more wonder and happiness to our already great life. We would love to give Charlie the experience to have a sibling (something we both experienced and fondly value). I want our children to have each other throughout thick and thin; someone they can always depend on no matter what. I can already picture Charlie helping teach her little sibling how to play. At play dates, I find myself day dreaming slightly and imagining this will be similar to when she has a sister or brother to play with. I’m excited to see a completely different little personality come through on this new addition to our family unit. There’s a simple wonder and joy that kids have; as adults, witnessing it, is purely magic. I love being a father to Charlotte and the only thing greater would be being a father to Charlotte and a sibling.

We currently live in a large condo in West Hollywood that we purchased a few years ago. It is close to the hospital where Tom works. We also have purchased a lot in Sherman Oaks and have started the process to build our dream home; the perfect place to raise a family, in a good school district. 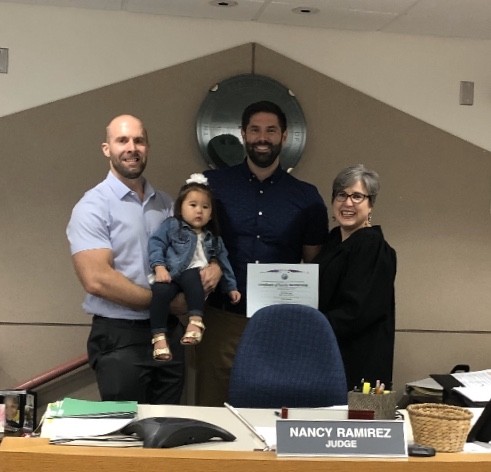