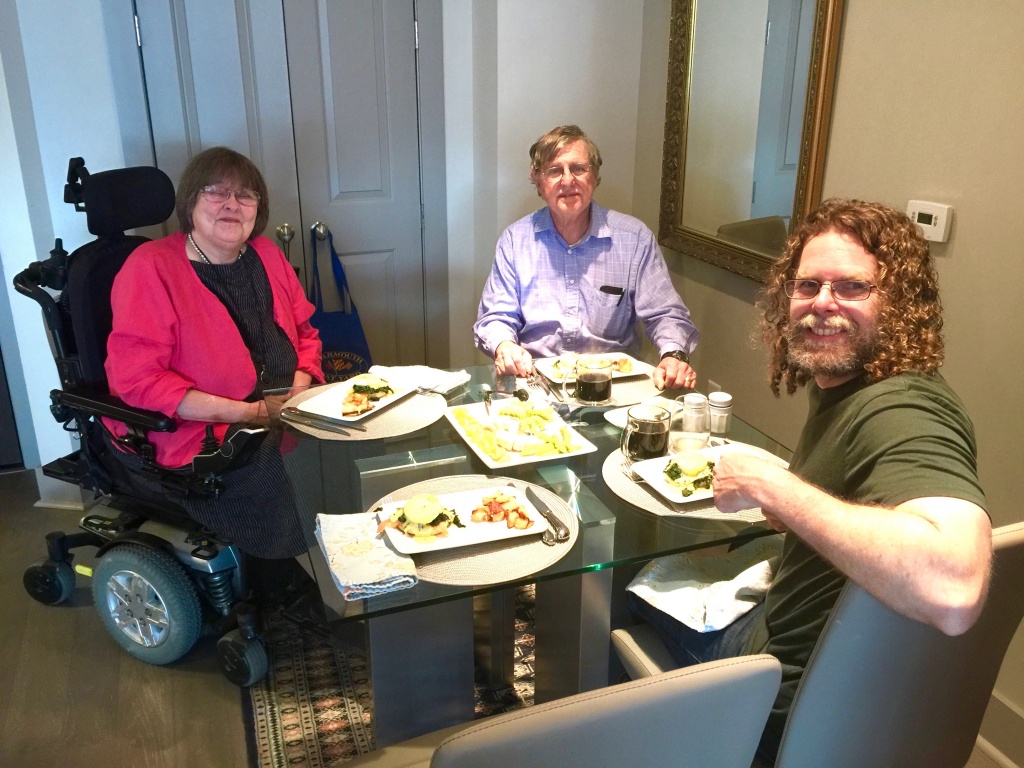 Last week, David went to Texas to see his father, John, who was going to need to have surgery. This is an ongoing treatment for a tumor that started in his kidney. Back then, the doctors told our family that if you had to have cancer, it’s the best kind to have. There’s no bloodstream or lymph nodes to deal with, no metastasis. So  in September, he had his first surgery and his kidney was removed.  However, for a cancer that doesn’t metastasize, it sure seems to get around. Since then, he has had two additional surgeries.  This time the surgery was in Houston, where the cancer doctors tend to congregate. It’s hoped that this time the remaining rebellious cells will have either been removed from the body, or put into a position where the body’s natural immune system can take care of them. It wasn’t a serious operation, but it definitely required skill and technology that wasn’t available in Corpus Christi. And because David’s stepmother, Louise, can’t drive, he saw it as an opportunity to help out while spending time with his father.

His mother Dianna picked him up at the airport so that they could spend an evening together. Because it was late by rural Texas standards when the plane landed (nearly 9:00 pm), options were limited to Whataburger, a local fast food place that always calls out to Texas boys and girls coming home after long absences — only to punish them afterwards with heavy meat that sits in their stomachs like a ball of cheddar cheese-covered wasps wrapped in barbed wire.

The next day, he drove his father and stepmother to Houston. While we were worried that John would be worried or depressed, he had a very positive outlook. This was most likely because he knew he would still be able to do the things he loves afterwards. David’s father is what today would be called an “extreme outdoorsman”. He was much more worried when he had his kidney removed, because he was afraid he couldn’t go fishing anymore. Two months later, he was standing waist-deep in the freezing Kispiox Rivier in British Columbia at the crack of dawn, pulling steelhead out of the currents with his fly rod, feeling more alive and vigor-blessed than men a third his age.

Essential to John’s attitude was his friend Paul and his wife, who lived in the same apartment complex where we were staying for a few days. Paul claimed to have met David once back when he was barely able to walk, and had evidence to prove it in the form of an old photo in one of the family albums of David and his daughter playing in the bathtub together when they were around two years old. They provided valuable support during the days spent around the hospital, feeding the family and making sure everything was okay.

The operation itself was more of an inconvenience than anything, with David and Louise spending the entire day in the waiting room, and then in post-op with John while we waited for the surgeon to discharge him. We were all happy that things went smoothly, and John was back in the apartment and demanding a glass of beer and Mexican food — the only two things the nurses told us he couldn’t have.  That said, they also told us that if he was well enough to complain about not getting it, he was probably well enough to eat it, so Paul ordered a feast from his favorite restaurant.

As an extra surprise, David’s sister Margie took a day off from work to drive up with her son John Hayden, “The Traveler”, so they were able to spend some extended family time together and forget about health issues or the long trip ahead of them.  In fact, they decided to stay a whole extra day in Houston, allowing John to get some extra rest and for David to spend some time enjoying some quality time and taking care of his nephew.

The trip home was amazingly fast, but without much talking, as Louise has been listening to books on tape, and they spent the next four hours learning about the assassination of President James Garfield — which also happened to be an example of one of history’s most egregious cases of medical malpractice (he would have survived being shot if his doctors simply left him alone). David is home now, sad to be away from Texas, but happy to be back with Maria and the beasts.